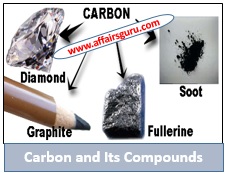 It is a member of group 14 in the Periodic Table, with symbol C and atomic number 6. It has three crystalline allotropes. It is non-metal having atomic number 6 and mass number 12. It is placed in group (IV) A or group 14 in periodic table.

Also called as Plumbago or black lead. It is opaque and black. It is a very good conductor of heat and electricity. It is soft enough to form a streak on paper. It is soft, greasy, dark greyish colored crystalline solid. Its specific gravity is 2.3. The hybridization of carbon in graphite is sp2 and it has hexagonal layer structure. It is chemically more reactive than diamond. Its layer structure is held by weak van der waal’s force.

Graphite is used in making for lining and making electrodes of electric furnances, in making refractory crucibles, in making lead pencils, as a moderator in nuclear reactor, as lubricant in machinery, as a reducing agent in steel manufacturing.

It is highly transparent and purest form of carbon. It is the hardest materials known substance. It has a very low electrical conductivity. Under normal conditions, it has the highest thermal conductivity of all known materials.Its gravity is 3.52 and refractive index 2.415.

It is chemically inert and on heating above 1500° C, transfer into graphite. It form tetrahedral crystals and hybridisation of Carbon-atom is sp3. It has high melting point (mp) and density. Black diamond called carbonado contains traces of graphite.

It (C60) looks like a soccer ball (or bucky ball). It contains 20 six membered and 12 five membered rings of carbon atoms. It acts as wonderful lubricant and the alkali metal compounds of C60 are used as superconducting substance at the temperature range of 10-49 K.

Difference between Diamond and Graphite

Graphene is an allotrope of carbon. Its structure is one-atom-thick planar sheets of carbon atoms that are densely packed in a honeycomb crystal lattice. The term graphene was coined as a combination of graphite and the suffixene by Hanns-Peter Boehm, who described single-layer carbon foils in 1962.

It is formed by incomplete combustion. It is a colourless, odourless gas. It contain a triple bond and are fairly polar, resulting in a tendency to bind permanently to haemoglobin molecules. displacing oxygen, which has a lower binding affinity.

Acetic acid : was the first organic compound synthesised in the laboratory from its elements.

Hydrocarbons and Its Type

Compounds made of carbon and hydrogen atoms only are called hydrocarbons. The natural source of hydrocarbons is petroleum.

Methane is the first member of this group. 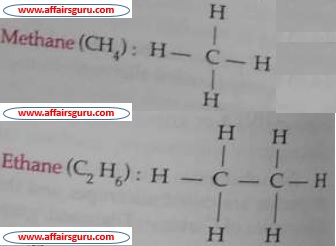 The hydrocarbon in which atoms are either doubly or triply bonded are called unsaturated hydrocarbons. Double bonded carbon atoms (C=C) hydrocarbons are called alkenes. The general formula of alkene is CnH2n 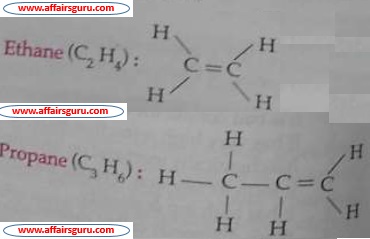 These are homocyclic compounds which contains atleast one benzene ring in which carbon atoms are linked to one another by alternate single and double bonds. (4n+1) Πe- (Huckle’s rule)

In Greek, aroma stands for sweet smell. Compounds in these classification have pleasant smell. Hence they are called aromatic compounds.

Benzene is the first member of aromatic hydrocarbons.

It is an atom or group of atoms in a molecule, which is responsible for the chemical properties of the molecules.

It is a series of compounds in which adjacent members differ by a -CH2 unit (14 unit mass). All members of a homologous series have same functional group and same chemical properties.

Compounds having the same molecular formula but different structure are called isomers and the phenomenon is called isomerism.e.g. C2H6O can have the following structure CH3OCH3 and C2H5OH.

The term petroleum (Latin petra = rock, oleum = oil) is the dark-coloured oily liquid with offensive odour found at various depths in many regions below the surface of the earth. It is also called rock oil, mineral oil or crude oil.

A complete list of petroleum products, approximate composition, boiling range and their uses is given ahead.

Uses of Some Important Organic Compounds

Methane (CH4) is used to manufacture printer ink, methyl alcohol and to obtain light and energy.

Ethylene (C2H4) is used to prepare mustard gas (war gas) and for ripening of fruits.

Glycol (C2H6O2) is used as a antifreeze mixture in car radiator and to prevent the freezing of fuel in space crafts.

Acetylene (C2H2) is used to generate light, to weld metals as oxy-acetylene flame and to prepare synthetic rubber (neoprene).

Methyl alcohol (CH3OH) is used as a fuel with petrol, used to synthesise varnish and polish, used to donature ethanol.

Chloroform (CHCl3) is used as an aneasthetic and to preserve substances obtained from plants and animals. It converts into poisonous phosgene (COCl2), when exposed to sunlight. So it is kep in dark bottles.

Formic acid (HCOOH) is used as a preservative for fruits and juices, in leather industry and in coagulation of rubber.

Acetic acid (CH3COOH) is used in vinegar, medicines, and as a solvent.

Oxalic acid (C2H2O4) is used in printing of clothes, in photography and in synthesis of coaltar.

Glucose (C6H12O6) is used for the synthesis of alcohol and as a preservative for fruit juice.

Benzene (C6H6) is used as a solvent for oil fat and in dry cleaning. Sodium benzoate is a food preservative.

Toluene (C6H5CH3) is used to synthesis explosive TNT, for dry cleaning and for the synthesis of medicine like chloramine.

Ethyl alcohol (C2H5OH) is use for drinking, in medicine to prepare tincture and as insecticide. And as a fuel with petrol.