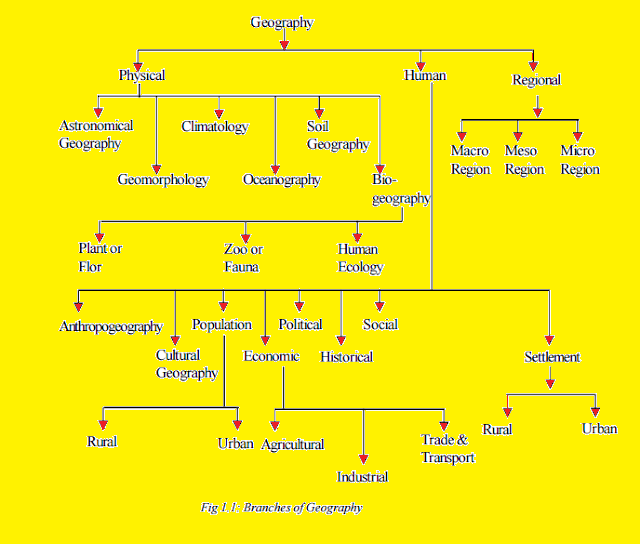 Branches of Geography based on systematic approach

What is human geography

Human geography is a branch of the Geography that studies the world, its people, communities and cultures with an emphasis on relation of land across space and place. This field also deals with Locational analysis, Radical, Behavioural, Human and welfare approaches, languages, religion and secularisation. The fields of human geography are

What is physical geography

Branch of Geography based on Regional Approach

What is Regional Geography

Regional geography includes aspects such as delineation of regions, their geographical characteristics and processes of change.

Geography thought is an essential concept of geography. There are some other branches of Geography like geography of mountains, geography of water resources, geography of deserts. The knowledge of geography is needed for environmental planning and for all development studies. It is one subject which deals with all spheres of planet Earth in space. Geography is a major subject developed as a consequence of human-beings immediate need for functioning in physical world around them. There was a need to familiarize with the surrounding environment of people with reference to seas, lakes, rivers, forests soil and mineral resources climatic conditions and many more aspects.

Any basic understanding of geography always start with the study of physical geography. Physical geography focuses on the earth in the solar system, the Earth’s physical systems like atmosphere, biosphere and geo sphers landforms and processes working of various ecosystems , their relationship with one another. It is an integrated study of Earth’s visible natural environment and understanding of the characteristics of land water and climate.