Operation Blue Star was an Indian military attack launched to remove militant religious leader Jarnail Sngh Bhindrawale and his followers who had sought cover in the Amritsar Harmandir Sahib Complex (Golden Temple) carried out between 1 and 8 Jun 1984. 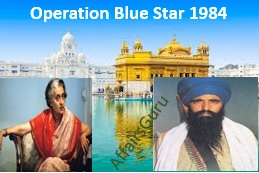 In Jan 1984, India’s secret service RAW prepared a covert plan codenamed Operation Sundown involving special forces to abduct Bhindranwale from the Golden Temple complex. However, the operation never materialized due to Indira Gandhi’s rejection. It would have caused numerous casualties as collateral damage, the Golden Temple being one of the most visited sites in Punjab. Other options such as negotiations were chosen instead.

Government sent a team led by Narasimha Rao to try to convince Bhindranwale to back out but he was adamant. The negotiations failed and the law and order situation in Punjab continued to deteriorate. Indira Gandhi tried to persuade the Akalis to support her in the arrest of Bhindranwale peacefully. These talks ended up being futile.

After the negotiations with the militants failed, Indira Gandhi ordered the army to launch Operation Blue Star.

At least seven divisions of troops were deployed in villages of Punjab. By nightfall media and the press were gagged and rail, road and air services in Punjab were suspended. Foreigners and NRIs were denied entry. General Gauri Shankar was appointed as the Security Advisor to the Governor of Punjab. The water and electricity supply was cut off.

In the morning the curfew was relaxed to allow Sikh pilgrims to go inside the temple to celebrate the martyrdom day of Sikhism’s fifth guru Arjan, who martyred in the early 17th century. Around 200 young Sikhs were allowed to escape from the temple premises during this period. Most of whom were criminals and left-wing extremists (naxalites).

In the night the curfew was re-imposed with the army and para-military patrolling all of Punjab. The army sealed off all routes of ingress and exit around the temple complex.

Announcements were broadcast over loudspeakers asking pilgrims inside to leave the temple. The artillery and small arms firing stopped for a while, and Gurcharan Singh Tohra, former head of SGPC, was sent to negotiate with Bhindranwale for his surrender. He was, however, unsuccessful and the firing resumed.

Hotel Temple View and Brahm Boota Akhara, on the southwest fringes of the complex was attacked by BSF and CRPF.

Army used Vijayanta tanks to destroy the Akal Takhat. It suffered some damage but the structure was still standing.

Army fought about four Sikhs holed up in basement of a tower. A colonel of the commandos was shot dead by an LMG burst while trying to force his way into the basement. By the afternoon of 10 June, the operation was over.

Unofficial casualty figures were higher. Bhindranwale and large number of his militants were killed.