Pronoun and Its Kinds With Examples PDF | Rules of Pronoun

A word used in place of Noun is called a Pronoun. In order to avoid repetition of a noun in a sentence, pronoun is used. Example, Mrs. Shukla, being a good teacher, she is liked by all the students. (remove ‘she’) ‘She’ is a pronoun and must be used in place of the Noun (Mrs. Shukla) and not with the noun. 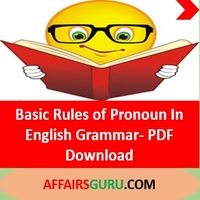 2. Possessive pronouns:  Pronouns that shows possession. Mine, our, yours, his,  her, theirs.

3  Demonstrative Pronouns: Words used for Nouns to point something / someone. This, that, these, those.

4. Distributive Pronouns:  Words used for individual or Objects referring to them as one at a time. Each, either, neither, every, none.

5. Reciprocal Pronouns: Each other, One another.

6. Reflexive Pronouns: Myself, Our selves, yourself, yourselves, himself, herself, it selves, themselves, oneself.

7. Emphatic or Emphasizing Pronouns: Such pronouns are used to lay stress on the subject. For Example Myself, Our selves, yourself, yourselves, himself, herself, it selves, themselves, one selves. For Example

You, Yourself –are responsible for your problems.

8. Indefinite Pronouns: Words used for nouns in vague or general meaning. Everybody, somebody, nobody, anybody, everybody, someone, no one, anyone, everything, something, nothing, anything, all, some, any, both, another, much, few, little.

9. Relative Pronouns: Words used for nouns to show them ‘relating to’. Who, Whom, Whose, Which, that, etc.

10. Interrogative Pronouns: Words used for nouns to ask question. Who, Whom, Whose, Which etc.

Use of Personal Pronoun

They are used as First Person, Second Person and Third Person. they are called personal Pronoun.

Verb is preceded by Nomination Form of pronoun and followed by Objective Case. For Example

He is taught by me. (Passive Voice). – Now it is reversed.

If all the three person or two out of three persons come in a single sentence, the order is 231. For example

If all the three persons or two out of three persons come in a single sentence and something wrong is talked about or some mistake done by the persons has been accepted, the order is 123. For Example

If Pronoun are in plural form, the order should be 123. For Example

We., You and they should now get down to work.

(iii) Everybody but him was present for the meeting. (✓)

(vi) Everyone attended the party except he. (×)

Everyone attended the party except him. (✓)

If  a sentence begins with ‘It’ followed by any form ‘be‘ the pronoun that follows ‘be‘ must be in nominative case. For Example

‘It‘ is used for non-living things, animals, infants and insects. This is the plural from of it. For Example

(i) America is a developed country. It is a super power.
(ii) Srilanka and Pakistan are developing countries. They are facing internal terrorism.

‘It‘ is used to denote time, weather, temperature, distance  or any other natural event.It is used only as introductory subject In this case, it is called ’empty it’ as it has no meaning. For Example

(i) It is raining

(ii) It is morning

(iii) It is Winter

It is also used in Infinite Clause and Gerund. For Example

(ii) It is said that virtue its own reward.

‘It‘ is used in a sentence as a subject to emphasize the noun  or the pronoun. For Example

(i) It was he who made this mistake.[Where ‘he’ is a pronoun]

‘It’ is used to introduce  a phrase or clause. For Example

Difference Between ‘This’ and ‘It’

‘This’ is used to point towards a person or thing or for the introduction of a person or when the singular object or person is placed at a near distance. Here, ‘it’ will not come.

(iii) This is Rohan, my cousin.

=> It denotes the time / distance / weather. Here ‘this’ is not used for this purpose.

Note: A Noun can be used after ‘this‘. For Example

This book is mine. [Where book is noun]

‘It’ is a pronoun and hence a noun can not be used after ‘it’ as ‘Pronoun’  and ‘noun’ can not come together.

Use of Possessive Pronoun

Possessive Pronouns are not used before nouns. For Example

Our School was closed for four days. (✓)

Note: (i) Possessive Adjectives are used before nouns. For Example

(ii) If the noun has already been mentioned, possessive pronoun is used to avoid repetition. For Example

This book is mine.

(iii) ‘His’ is used as both possessive Adjectives and Possessive Pronoun.

Possessive Pronouns can be used in any sentence as the subject of the verb. For Example

Meaning : Your car is new car.

Possessive Pronoun can be used as an Object of a Verb. For Example

Meaning – He has lost my books as well as yours.

Possessive Pronoun can be used as the object of a preposition. For Example

We do not use possessive pronoun with separators, leave, excuse, mention, report, pardon, sight, favour. For Example

(i) Your separation is very painful to me. (Use ‘separation from me‘)

(ii) At his sight the robbers fled. (‘At the sight of him‘ is right)

In Possessive Pronouns, apostrophe is not used before ‘s’. The use of your’s, her’s, it’s is wrong.

Gerund is used after Possessive Adjective. In such cases never use Possessive Pronoun or Objective case of Pronoun.

E.g.: (a) I was confident of my winning the match.

(b) She was not confident of her doing well in the examination.

(c) She is sure of my/my/me/mine helping others. (‘my’ is the correct choice)

if Collective Noun is used as a subject, and it denotes separate individuals or a division, is showing among a members. It is considered Plural  and hence Plural Pronoun and plural adjective / pronoun They, Them, Their, theirs, themselves, are used with them.  For Example

When two subjects are joined by ‘either…………Or,  Neither………Nor, Not only………but also, none…….but,  the possessive adjectives / pronoun agrees with the nearest subject. For Example

(i) Neither the staff members nor the manager was taking his task seriously.

If two or more nouns two singular noun  are joined by ‘and’ plural pronoun and plural adjective they, them, their, theirs, themselves are used. For example

(i) Ram and Shyam do their work.

If two singular noun are joined by ‘and’  and if an article is used before the first singular noun , it denotes one person / thing, here singular Pronoun and adjectives –he, him , his, himself  will come for human being and it, its, itself will come for non-living things. For Example

When each, either, neither, anyone, every  is used as a subject. 3rd person singular is used as the  possessive case. For Example

(i) Neither of the two brother has brought their luggage.( Change ‘their’ into ‘his’)

Use of Demonstrative Pronoun

Demonstrative case is used to point towards a noun / nouns. This, that, Those, these, such , the same.  If they come before the noun, they are called demonstrative Pronoun.

(ii) Those are books.

Note: To avoid repetition of a Singular noun ‘That’ is used. In case of a plural noun ‘Those’ is used.  For Example

(ii) These are new books but those are old ones.

Use of Distributive Pronoun

Either  denotes choice between two. For Example

(i) Either if these three friends are naughty. (×)

Note: ‘Any’ or ‘One’ is used to choose between many persons or things. For Example

‘Neither’ denoted ‘ None out of two things / persons. For Example

Note: ‘None’  denotes ‘ none out of more than two things / persons.’ For Example

Use of Reciprocal Pronoun

‘ Each other’  and ‘One another ‘ are called reciprocal Pronoun. They denote mutual relationship.

(i) he was so afraid that his knee knocked one another. ( Use each other in place of One another. )

(ii) After the farewell the students of class XII bade each other good bye. ( use one another in place of each other. )

Use of Reflexive Pronouns

E.g.: The poor man poisoned himself and his children.

(a) The officers acquitted themselves well during the crisis.

(b) She has reconciled herself to the demands of her in-laws.

Keep, Stop, Turn, Quality, bathe, move, Rest,  and hide b do not take a reflexive pronoun.  For Example

(i) You should keep yourself away from bad boys. ( remove Yourself)

(ii) He hid himself in the room. ( Remove Himself )

Reflexive Pronoun can not be used as a subject or an object in a sentence unless a noun / pronoun comes before it. For Example

(ii) I myself did this work.

Use of Indefinite Pronoun

If ‘one ‘ is used as the subject, nominative case ‘one‘ and objective pronoun ‘oneself ‘  is used. For Example

(i) One should do one’s duty oneself.

(ii) One should keep one’s promise.

Use of Relative Pronoun

Those pronoun that connect a clause or Phrase to a noun or a pronoun is called a relative Pronoun.  For Example – who, which What That , why, etc.

(i) I met Veena, Who was returning from school.

Relative Pronouns ( Which / That / Who ) are used as a subject in subordinate clause. For example

(i) The boy who came here is a player.

Relative Pronoun ( Which / that/ Whom ) are used as Object in Subordinate Clause. For Example

If two antecedent are joined by ‘and’ one being a human and the other being a non-living thing / animal, a Relative Pronoun ‘That’  is used. For Example

(i) The man and his Dog  That  I saw yesterday have been kidnapped.

‘That’is used after a Superlative degree. For Example

(i) Mr. Mishra is the Most Laborious man  that i have ever seen.

If ‘Áll ‘ denotes  people and is used as a subject, who or that’ is used and not ‘Whom / Which. ‘  For example

(i) All who / that are interested to do this work can start now.

If ‘All’ denotes the non-living things, ‘that‘ is used and not  ‘who or Whom’. For Example

(i) All That glitters is not gold.

Note: All + Uncountable Noun is followed by ‘That’ .  For Example

(i) All the money  that i gave her has been spent.

Everything, Nothing, the only, any, all, everyone, none, no, nobody, much, little, the same, the few, the little will take ‘that’ after him. For Example

(i) My father has given me everything that  I needed.

(ii) My wife has spent the little money that  I needed.

(iii) This is the only  pen, that i bought yesterday.

If the verb is mentioned, the same + noun is followed by ‘that’.  For Example

(i) This is the same men that  deceived me.

Use of Interrogative Pronoun

Pronouns that are used for asking question are called Interrogative Pronouns. For Example who, whom, whose, which etc.

Who is used for Subject. For Example

Whom is used for the Object. For example

Whose  is used to find out the owner. For Example

(i) By Whom  was the Ramayana Written ?

Note: If the preposition is used at the end of a sentence, ‘who’ comes at the starting of a sentence. for Example

(i) Who was the Ramayana written By. ?

If choice is to be made between two or more, which is used. For Example

‘ Whose ‘   is not used for non- living things. For Example

Download Rules of Pronoun  In English Grammar With Examples PDF

Candidates can download rules of Pronoun In English grammar with examples pdf file by clicking on below link.