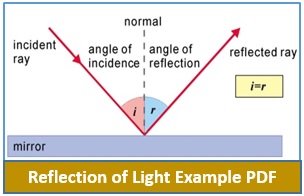 What is reflection of light in physics

Light moving in one medium when falls at the surface of another medium, part of light returns back to the same medium. This phenomena of returning back of light in the first medium at the interface of two media is known as reflection of light.

n = 360/θ if the object is symmetrically placed.

Position & nature of image formed by a spherical mirror

Note : Image formed by a convex mirror is always virtual, erect and diminished.

Candidates can download the Reflection of light by clicking on below link.

Practice make a man perfect. All the best for your upcoming exam!

You can join or visit at

for always keep in touch with further updates.