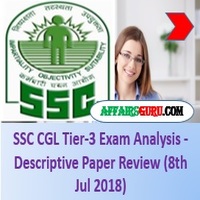 Why Commission conduct the Descriptive Paper?

Staff Selection Commission conducts this test to know the writing ability and knowledge of any particular topic. This is the next key to open the door of success for you. All the candidates who qualified Tier-2 Exams appeared in the Tier-3 exam. There are two components of descriptive paper (i) essay writing (ii) Letter writing.

SSC CGL Tier-3 (Descriptive Paper) was of 100 marks and total time allotted to complete it was 60 minutes.

We have provided below the questions asked and topics in SSC CGL Tier-3 Exam. Let’s go through straight given below topics.

Choices were not given and candidates were required to answer both the questions. Pens were not provided in the exam hall as students were expected to bring their pens. Blue/Black both pens are allowed. Exam was for one hour from 11 AM to 12 PM.

On November 8, 2016, Prime Minister Narendra Modi announced demonetisation – an exercise that immediately banned Rs. 500 and 1000 currency notes. The Government took the battle to the opposition on the issue of demonetisation of high value currency notes. There is a big difference between the government and the opposition party on acting against black money. BJP has taken a stand against black money and has celebrated 8 November, 2017 as anti-black money day, whereas opposition parties observed it as a black day. The government had managed to make headway with three objectives of demonitization: cash transactions, digitizing commercial transactions and expanding the tax base. The Central government is leaving no stone unturned to make people aware of the benefits of the demonetisation and they have given the following facts.

A. Demonetisation – A Historic and Multi-Dimensional Success

B. Decisive blow to terrorism and naxalism

D. Big push towards formalisation, better jobs for the poor

Demonetisation was a decision with few parallels in India’s economic history. It was both an economic and a political necessity. The demonetisation decision was a political bet by the PM and over the next 18 months by May 2019, it will be revealed whether it was the right bet. It is too premature to analyse the overall economic impact of demonetisation, just within a year.

The SSC CGL Tier 3 (8th July 2018) Exam is over now. So, it’s time to share your experience with the exam as it will help you know bits and parts of the exam. Share your SSC CGL Tier 3 Exam 8th July 2018 Review and know where you stand among thousands of aspirants who appeared for the exam. And if you remember any questions or the type, share it with us.

Your review will be propitious for the other candidates and will help them to build up their own strategies and plans for upcoming exams based on the review shared.