Staff Selection Commission(SSC) will be releasing the SSC CHSL Admit Card for Tier-1 exam soon. The Tier-1 exam will be Computer Based Examination (CBT) to hire the eligible candidates for various posts. 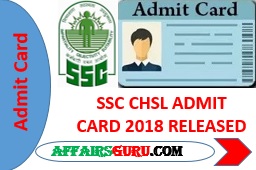 Update : SSC CHSL Exam will be held from 4th March to 26th March 2018. Admit card for SSC CHSL will be released separately for different regions, keep visiting this page to get the official link to download SSC CHSL Tier-1 2018 Admit card for your regions.

The Candidates who have already applied for Combined Higher Secondary Level Examination can download their SSC CHSL Hall Ticket using the below links.

Note : SSC CHSL Tier 1 Admit Card will be also released soon for other region. Our AffairsGuru Team will update the region-wise Link above as soon as we get the notification from the SSC Department.

Step 2 : Click on the Admit Card Link given in menu on top of home page of official website.

Step 5 : Your SSC CHSL 2018 Tier 1 Admit Card will be visible on your device screen as you click on Submit.

Step 6 : Download it and take a printout for future reference

Step 7 : Alternatively, you can visit on the above direct link given

Step 9 : Don’t forget to take original and Photocopy of Id Proof with you on the examination day as well as Admit Card photocopy.

SSC CHSL examination has conducted by the Staff Selection Commission (SSC) every year. CHSL is the shortest and popular name of Combined Higher Secondary Level Examination. Some people have known it as 12th Level Examination.

All the Best for your upcoming Exams!