As you all know that SSC CHSL 2019 Tier-1 Answer key has been declared and SSC CHSL Tier-2 Descriptive Paper is near. SSC CHSL Tier-2 would be a descriptive paper of 100 marks in ‘offline (Pen & Paper) Mode’ and will be tentatively held in the month of September 2019. 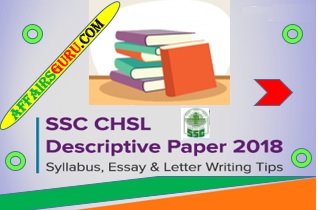 You should be cleared that there will be no option between the Essay and Letter. It means that only one letter and one essay will come into the exam and you have to write that topic only.

♦  The Essay and letter may carry 50 marks each.

♦  Paper will be Pen and Paper based.

♦  Total Duration of the Paper will be 60 Minutes.

♦  Candidates can write the Essay and Letter in either Hindi or English (bilingual language) whichever suit you.

♦  The marks of this paper will also be included into the final merit list.

(i) First of all, write the introduction of ‘What is mission of Swachh Bharat Abhiyan’.

(ii) Then write its details like ‘started date‘, view of leaders

(iii) Pen down its aim as well as how it becomes beneficial.

(iv) Problem faced by the Government while running this mission.

(v) In Conclusion, provide the details like how could this problem be solved and how can its reaches to trillions of people.

Write a letter in 200 words to Sport Authority of India, Department of Sports, Government of India, giving your assessment regarding Indian performance in Rio Olympic games and suggestion on how can you improve in next Olympic games.

Flow of writing the above Letter In SSC CHSL Descriptive Paper

(i) Pend down your assessment about performance of India in Rio Olympic games. Write down complete details.

(ii) Explain the drawbacks that you have found in the Indian performance.

(iii) Provide your suggestions how can this be improved in next Olympic games.

Topic : Assuming that you are Suresh/Seema, write a letter to your younger brother Naresh, highlighting the distinct benefits and a shortcomings of Computer Based Recruitment test, and what will be the future shortfall of it.

If you have written more than 275 words or less than 225 words, then there will be negative marking. You should not write more than 2 and an half page for essay.

7. Role of technology in gross development

8. GST bill and its benefits (More chances to come in exam)

11. Make in India Inititative (More chances to come in exam)

18. New Scheme for Monthly Allowance of Rs. 1500 to Unemployment & Poor

19. Mid-day Meal Scheme for Madrasa to be Launched Soon (More chances to come in exam)

37. Reservation of women in Parliament

SSC will also give to candidate to write the Letter which have to write anybody like to editor/ Governing body/ In-charge/ friends/ any relative regarding anything. So guys make your wide and think smartly.

1. Complain letter regarding increasing noise pollution in your locality.

2. Complain letter regarding trouble faced by common people due to demonetisation.

3. Complain letter regarding recent articles in a popular newspaper being based only on Bollywood stars rather than relevant and important news.

4. Complain letter mentioning chaotic state of traffic near your locality.

6. Letter to present views on Corruption.

7. Letter to present views on Education beyond classroom teaching.

8. Letter to present views on ‘Nature and its protection’

9. Letter to present views on effect of digitalization on today’s youth.

Guys, please also check the format for writing the letter as it is also matter for scoring good marks.

How to write Letters/ Applications for SSC CHSL Descriptive Paper?

A. Candidates should have to follow a prescribed format to write a letter or application.

B. Candidate cannot write the body above the subject , address. A letter has some basic parts:

C. Candidate must keep the following aspects in the mind while writing the letter.

D. In Formal Letters, you need to write to

E. In Informal Letters, you need to write to

2. A hadbook for Letter Writing by SC Gupta

You can join or visit at Facebook Page or Twitter for always keep in touch with further updates.
Read more articles….