Ministry of External Affairs announced on January 14, 2021 that there will be no foreign leader as a chief guest for the celebrations of Republic Day this year because of the global situation arising out of the COVID-19 pandemic. This will be for the first time in over five decades that the country will not have a Chief Guest at the Republic Day parade.

Some Important and Interesting Facts about Republic Day of India

British Prime Minister Boris Johnson was supposed to be the Chief Guest at the 2021 Republic Day. The UK Foreign Office released a statement that the decision to cancel the visit was taken in view of the COVID-19 pandemic that has escalated in the United Kingdom because of the new strain of the coronavirus.

Initial four Republic day parades were held at different places (Red Fort, Ramlila Grounds, Irwin Stadium, Kingsway) between 1950 to 1954. But the first celebration was held at Rajpath in 1955.

The Indonesian President Sukarno was the first Chief guest on the very first Republic Day parade of India. Representatives from the United Kingdom and France have been invited 5 times each. 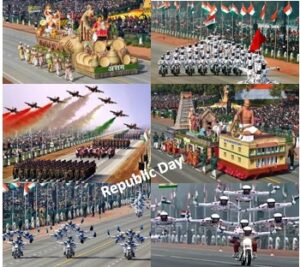 How the chief guest is chosen in India’s Republic Day?

The Chief Guest is given the ceremonial guard of honour at Rashtrapati Bhavan, he attends the reception in the evening hosted by the President of India, he lays a wreath at Rajghat, there is a banquet in his honour, a lunch hosted by the Prime Minister, and calls by the Vice-President and the External Affairs Minister.

Six months prior to Republic Day, the Indian Government sends the invitation to either the Head of State or the foreign Government subjected to the kind of relationship India has with the concerned country.

Before sending the invitation, the approval of the Indian Prime Minister is sought in addition to the clearance from the President of India.