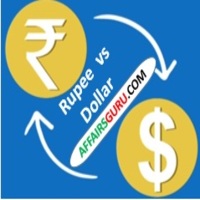 In India, most of the people want to know the history data of Indian rupee against dollar from 1947 to 2021. How Rupee value has been increased against Dollar. During the independence, value of 1 dollar was equal to 1 Rupee. What happen that India rupee is continuing devalued in previous 70 years. Today, condition is like that we are paying 73 rupee (₹) for getting 1 dollar ($). Let’s take you to the journey of the decreasing slope of rupee which is from starting 1947. We will tell you the reason of the decreasing or increasing value of currency.

Before getting India independence, there was rule & effect of British. When India got independence in 1947, then Rupee vs Dollar trend was like that 1 Dollar = 1 Rupee. However, rupee was continue to be devalued due to political  and economical change after independence. When India implemented the first panchvarshiye yojana (Five-Year Plan), it need loan from foreign for growth. Due to which India first time has to devalued the rupee against dollar.

Increase Foreign Investment & Export so that foreign reserve can be increased. Understand it by example, If rupee value will be less, then person outside of India country will import more from India. That’s only the reason that any one of country decrease their currency value to enhance the export.

After Independence, India has applied the Fixed Rate Exchange System. With the help of this system, government was decided that what will be the value of the rupee against dollar. Rupee was decreased by 4.79 paise against dollar due to this system after 1948.

In 1965-68, India rupee value reached to 7.57 paise due to decreasing of foreign reserve value (i.e. buying of ammunition from foreign country).

All the plans of government to stable rupee was failed. Due to this in 1993, government has replaced the fixed rate exchange with flexible rate exchange (i.e. now market will decide the value of rupee). After this, some power has also been given to RBI and rupee become 31.37 paise against 1 dollar.

Value of Rupee Depends on

Today, one most important reason of the devalued of the Indian currency is increasing price of oil. Due to this country is paying more to the foreign in foreign currency and foreign rate is decreasing.

Indian Rupee against Dollar PDF can be found by clicking on below link.

Indian Currency vs US Currency pdf will be uploaded soon.

Indian Rupee INR against Dollar graph can be viewed below trends.