Power Plants are stacked for generating electricity in country. Static GK is also an important part of any government exam, we are providing you the list of Important Nuclear Power Plants in India that might appear in any of the upcoming examinations.

Static is a section which you have to study in bits and parts. So do read it on a light note and revise it after two or three days and we can assure that you will retain the names and their states till the exam. 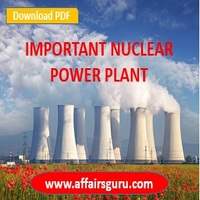 What is a Nuclear Power Plant?

How is Nuclear Power Plant works?

In nuclear fission, atoms are split apart to form smaller atoms, releasing energy. Fission takes place inside the reactor of a nuclear power plant. At the center of the reactor is the core, which contains uranium fuel.