Why did Aircel Company get Bankrupt ? Aircel Shutdown – दिवालिया क्यों 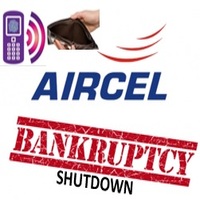 Aircel is an Indian Mobile Network Operator. Its headquarter is in Gurugram. It offers voice and 2G, 3G data service. Maxis Communications holds its 74% stake. Aircel was founded by Chinnakannan Sivasankaran and commenced operations in Tamil Nadu in 1999.

As on November 30, 2017, the top five wireless broadband service providers were

Aircel along with its units – Aircel Cellular and Dishnet Wireless filed for bankruptcy in the National Companies Law Tribunal (NCLT) in Mumbai due to fierce competition and high levels of debt (approx 15000 crore).

This is the fourth telecom firm to wind up after billionaire Mukesh Ambani led Reliance Jio debuted in September 2016, unleashing a disruptive price war in the sector with its free voice calls and dirt-cheap data.

Norway-based Telenor is transferring its assets to Airtel.

Wireless business of Tata Teleservices is also transferring its assets to Airtel.

Anil Ambani-run Reliance Communications, which is reeling under a debt of around Rs 42,000 crore, is bowling out of the business with Jio set to acquire its wireless infrastructure assets.

Aircel has been bankrupt due to the following reasons

The Telecom Regulatory Authority of India (TRAI) cut Interconnection Usage Charge (IUC) levied by telecom firms by 57%(In October, 2017). This is a big win for Reliance Jio Infocomm Ltd.

Aircel Cellular Ltd. has filled for bankruptcy under Insolvency and Bankruptcy Code, 2016.

Aircel has more than 85 million subscribers across 17 telecom circles, in India.

Aircel service were disrupted after Telecoms like Idea Cellular and Vodafone stopped interconnect services for non-payment of dues.

While the operator had shut services in six circles, services in other regions were hit due to financial problems. GTL Infrastructure had switched off nearly one-third of the total towers due to non-payment of dues.

On January 25, 2018, Aircel went into a strategic debt restructuring programme with its lenders.

Yet, just a few days later, the Reserve Bank of India (RBI) came out with stiff new rules under which existing SDRs had to be resolved within six months or be referred to the NCLT.

Krishan and Maxis, who had in their talks with bankers, promised to bring in $250 million as fresh equity into the company, were stumped with new rule and decided to call it a day.

Aircel currently has a debt of Rs. 150 billion.

The problem was simple : with Aircel incurring losses of Rs 1 – 1.5 billion every month.

Yet analysts say that its asset sale which include 2G and 3G spectrum – It has already sold its 4G spectrum to Airtel — is surely not going to fetch much money for its lenders, especially as most of their subscribers are in 2G.

And there are vendors like American Tower Corporation which have already gone to court to get their dues paid. Aircel’s future would have been different had the merger with Rcom fructified.

The merger entity, which was to be called Aircom (merger of Aircel & Reliance Communication)and in which it would have had 50 % stake, would have surely been a competitive fourth player in the market with a 15 % market share. That’s pretty close to share enjoyed by Idea Cellular.

The deal would also have helped Aircel to reduce its debt substantially by over rs 140 billion, leaving only a small portion of its loans to service. But with fears that  because of the various cases against the company, the department of telecommunications would not give the green signal for its merger, RCom decide to pull out.

Maxis was not ready to fund it for the next six months during which the SDR talks would go on.

This even though the lenders had agreed to convert their debt into equity.

The company has now reconstituted the board and has decided for the bankruptcy proceedings in the NCLT after its two attempts to revive its fortunes did not take off.

Despite this, Aircel made yet another attempt to survive in the face of an onslaught in the telecom sector from Jio. The company decided to prune its operations and concentrate on only those circles where it is strong and which have scope for growth as a niche player.

So on January 31, Aircel shut its operations in six circles and concentrated on the remaining sixteen.

Note : The Telecom Regulatory Authority of India (TRAI) has directed Aircel to generate Unique Porting Codes (UPCs) in operational circles where a large number of its subscribers were facing difficulties in porting their mobile numbers.

How to port your Aircel Number ?