To solve any Coding and decoding questions we have to learn Order of English Alphabet from (A – Z).

In this posts,  we are providing some tricks to remember position of English alphabets With Examples .

(i). By using two Words “EJOTY” and “CFILORUX“ we can easily remember the position of English Alphabets.

(ii). By Using “VQLGB” and “XUROLIFC” , we can easily remember the positions of letters of alphabet in Reverse Order

Step 1 : To solve above questions , we should try to  find which logic is used either Forward Or Backward Position of letters of Alphabet  is used in “BAG” . In this Backward positions of alphabet used.

Example 2 : In a certain code, LAKE is written as OZPV, How will BACK will be in that same code ?

To find the Code of “BACK” we have to know which type of logic is used by word ” LAKE”. For this

Step 1: Write these two Words “LAKE” and “OZPV ”  by drawing arrow between these words

Step 2: Remember position of Alphabets and write above of these words.

Step 3 : Try to find the the logic which can be followed by each alphabets of English Language in the above letter ” LAKE” opposite position for is codded.

Step 4 :  Apply the same rule to find the code for letter ” BACK” which have used in codding of letter “LAKE”.

Example 3 :  In a certain Code language ” BAT” is codded as “YZG”. How will “SICK” codded in the same language ?Solution : In the above Example, we have to find the code  for letter ” SICK” by using the used logic of Letter ” BAT” in codding as “YZG”.

Step 1: Try to find the logic used in codding of BAT by analyzing the code of BAT

Letter Coding  : Letter coding is a part of coding in which the letters of a word are replaced by certain other letter according to a specific pattern / rule to form a code

Example 4 :  In a certain code language, ‘PICTURE’ is written as ‘ QHDSVQF’. How would ‘BROWSER’ be written in that same code language ?

Solution: The letter in the Word ‘ PICTURE’ are moved alternately , one step Forward and Word Step Backward to obtain the letter of the code. 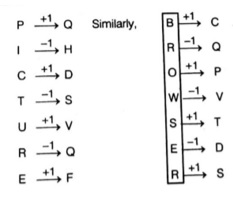 So, Code for “BROWSER” is CQPVTDS.

Example 5 : In a certain Code Language, ‘GIVE is written a ‘VIEG’ and ‘OVER’ is written as ‘ EVRO’. How will ‘DISK’ be written in that same code ?

Direct Letter Coding : In this type of coding, the code letter occur in the same sequence as corresponding letters occur in the words.

Example 6 : In a certain code language, ‘STARK is written as ‘LBFMG’ and ‘MOBILE’ is written as “TNRSPJ’. How will ‘BLAME’ be written in that code ?

Solution : Use the direct letter coding method to find the solution of word ‘BLAME’. 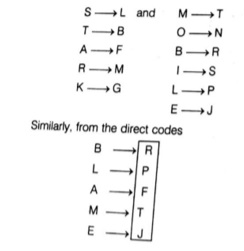 So, Code for BLAME is RPFTJ

Substitution Coding : In this type of coding, some particular words are assigned with certain substitute names. Substitute coding can be based upon color or any substance.

Solution : We know that National Bird of India is ‘Peacock’ but here , ‘Peacock’ is known as ‘Swallow’, So answer is ‘Swallow’

Deciphering Message Coding / Numeral Coding : In this coding, A certain message or number is coded  into another message on number.

To solve question of deciphering coding / Numeral coding, First of all we have to find the common code from the given statements, after that, we find the left code for a number , then we assume answer.