Rules of Conjunction with Example PDF 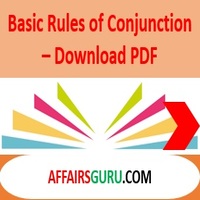 Some conjunctions, called cor-relative conjunction also used in pairs only. Their use is correct in pairs, not otherwise.  The more popular are –
Either  – Or , Neither – nor , Whether – or, Both – And, Though / Although – Yet, Not only – but also, Lest – should, No Sooner – Than,  As much -as. For Example
(i) He is neither strong nor courageous.

(ii) Both Mohan and Ram had passed.

(iii) I will go whether he comes or not.

Either……..Or / Neither…….Nor can be used as Cojunctions and also as Pronouns and adjectives. As Pronouns and Adjectives are used only for two person or things, but as Conjunctions They can be used for two or more than two. Correlative Conjunction they are used for two or more than two persons or things. For Example
(i) Either Kanpur or Lucknow or Agra will be good enough to settle down after retirement.

(ii) Neither Ram nor his father, Nor even his friend could be of any help to me.

After ‘Not Either’   we should use ‘Or’. For Example

(i) This book is  not either Exhaustive or up-to-date.

(ii) Your friend is not either reasonable or Fair.

If in a sentence there comes no / not / never, and after them a full clause, the clause would be connected by the conjunction, or not nor. For Example

(i) He has no relation, or Friend who can support him.

(ii) I never lived there,or even went there before.

(iii) He has not a relation or a friend who can support him.

Both these are negative conjunction, therefore, no negative expression should be used with them, otherwise there would be the fault of double negatives Therefor, such expression as unless he does not help, or ‘until he does not come’ are wrong.Their correct form will be ” Unless he helps”   or “Until he comes”.

Note: Here it should also be remembered , Until is a conjunction of time, while  Unless is  Conjunction of condition,  They should not be used in other’s place . For Example
(i) I shall wait until you come.

After Other / Rather and most of comparative Degree Adjectives  the conjunction ‘than’ is used. For Example

(i) I would rather go than stay at home.

(ii) He is stronger than you.

(iii) I would rather have a car than a scooter.

After Whether / If we use the conjunctions ‘ or not ‘  or ‘or no’. For Example

(i) I doubt whether  he will help me or not.

(ii) Whether he will help me  or not  is doubtful.

Note: If a negative or Interrogative sentence has to be made with doubt or doubtful, we should use the conjunction ‘that’ in place  of ‘whether’.  For Example

(i) I do not doubt that he will help me.

(ii) Is it not doubtful that he will help you ?

The Reason is / The reason Why

Some sentences begin with ‘The reason is’  or ‘the reason Why’.  In such sentences the clause coming after them should be connected with the conjunction ‘that’  not with because, due to, or owning to. For Example

(i) The reason is that  he did not study seriously.

(ii)  The reason why he failed is  that he did not study seriously.

When ‘before’ is used as Conjunction, it points to some future event or statement, but future tense is not used with it, even if its Principle clause is in the Future tense. For Example

(i) He will retire before a month has passed.

As If / As though

Both these are imaginary or Conditional expressions. We should therefore, use Past Conditional Tense after them not Present or Future Tense. For Example

(i) He helped me As though he were my son.

(ii) He danced with joy as if he had won the first prize.

Because / In Order That

We use’ because’ to show reason and ‘in order that’  to show purpose. For Example

(i) He failed because he did not work hard.

(ii) He worked hard in order that he may secure first division.

When ‘Since’ is used as a Conjunction, we should use the verb in the Present Perfect Tense Before It and Past Indefinite Tense after it. For Example

(i) I  have never seen him since his father dead.

(ii) Many new development have taken place since I left home.

‘While’  is used in two senses.

To show time or period of time, To suggest at the same time  or along with. For Example

(i) While the boy sang, the girls danced.

All these three words show cause or reason. the difference in their use is that Because has a very great force in it, for has the least force  and Since come between the two. For Example

(i) He failed because he did not work hard.

(ii) He could not catch me up  since he was lazy.

Conjunctions  that is used in the following forms

(b) ‘That’ as conjunction is not used is Interrogative, Imperative, Optative or Exclamatory clause, whether the whole sentence is in the Direct  or Indirect Narration,  The use of ‘that’ is wrong in the some sentence. For Example

(ii) He said that may God bless you.!

(c) ‘that’  is not used in clause beginning with Interrogative Pronouns( Why, What, Which etc.) or Interrogative Adverbs ( Where, why, When, how, etc.)  The use of ‘that’ is wrong in the following sentence. for Example

Note: But if after the clauses beginning with Interrogative Pronouns or Interrogative Adverbs, there comes the Principle Clause.For Example

(i) I promise that  when I come next I will bring your work.

In this sentence the use of that before When is correct because after the clause beginning with when, there comes the principle clause. “I will bring your work”.

(d) There are some Verbs for which ‘that ‘ as conjunction is used  after these verbs ( hope , believe, suppose, presume, be afraid ). Fro Example

(i) I believe that he is right.

(i) This book is not so good as that.

(ii) This book is as good as that

The following are conjunction of Condition.

If , Unless, Provided, Provided that, in case, supposing that. For Example

(i) He will succeed provided that he deals honestly.

(ii) I will go alone in case he doesn’t come.

The following are conjunction of Concession

Even if, for all, no matter, though, although,  however, whatever, adjective / adverbs + as. For Example

(ii) Though he is poor, he is honest.

Rule 21 – Conjunction of Cause

The following conjunction show cause

as, for, that, considering that, since, seeing that, now that, in that, in as, much as, noun + that, adjective+ that. For Example

(ii) Considering that it was very cold, he did not go for swiimming.

(iii) I am glad that he has passed.

The following are conjunction of time

As soon as, since, until, as, till, while, after, before, When. For Example

(ii) Wait for me till I return.

Download Rules of Conjunction In English Grammar With Examples PDF

Candidates can download rules for Conjunction In English grammar with examples pdf file by clicking on below link.

Rules of Conjunction In English Grammer With Example