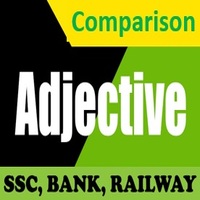 Way to change Positive into Comparative and Superlative Degree

If the positive degree ends in a consonant and a short vowel comes before it, the last consonant is doubled and then ‘er‘ and ‘est‘ are added to change it into comparative and superlative degree respectively.

When a positive degree ends in ‘y‘ and a consonant is present before ‘y‘, the ‘y’ is converted into ‘i‘, and then ‘er‘ and ‘est‘ are added respectively.

Adjectives that are of more than two syllables, are changed to comparative and superlative degree by adding more and most respectively.

Note : Certain adjectives do not follow any rule. They get changed completely.

Correct Use of some adjectives

I have some friends. [Plural Countable Noun (P.C.N)]

E.g.: I have some problems.

I do not have any problem

Do you have any problem?

When an answer is expected in ‘yes‘ , ‘some‘ is used in questions too.

Note : ‘no any’ cannot be used together

Fill in the blanks using few/little, a few/ a little or the few/ the little

(1) A little (here the sentence means that incomplete knowledge is a dangerous thing. Here we mean that knowledge is available but not much.)

(2) A few (‘days’ is a countable noun, hence a few is used and not little. A doctor will advise us to rest for at least some days, hence ‘a few’ is appropriate.)

(3) The little (water is uncountable and here it means the small quantity of water that I had kept for you, hence ‘the little’ is appropriate.)

(4) Few (If very few people come, the show gets cancelled, hence ‘few’ is appropriate here which means ‘hardly any’.)

(5) Little (when milk is in negligible quantity, tea cannot be prepared).

=> Little & few cannot be used with quantity & number. Instead ‘small‘ is used with them.

Small quantity of food was wasted. (✓)