These (Adjectives) are words that describe the states of qualities of being nouns (enormous,doglike, silly, yellow, fun and fast). These can also describe the quantity of nouns (many, few, millions, eleven). 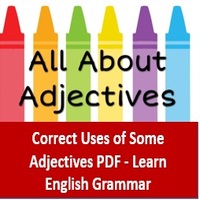 Positive degree of adjective / adverb comes in between ‘as……as‘ and ‘so……as‘.

He ran as fast as he could.

Here, ‘good’ and ‘fast’ are adjectives.

E.g. : He is better than his brother.

‘Than’ may or may not come after a comparative degree.

E.g.: Today I am feeling better.

‘The’ is used before a superlative degree.

E.g.: He is the best player of the team.

When one is chosen out of two, we use a comparative degree preceded by ‘the’ and followed by ‘of’.

She is the better of two sisters. (✓)

If one is chosen out of ‘more than two’ or ‘all’, superlative degree is used preceded by ‘the’  and followed by ‘of’.

E.g.: He is the best of the three/ all the players.

When two qualities of a noun or a pronoun are compared with each other, more + positive degree is used instead of a comparative degree.

He is more wise than intelligent. (✓)

If one is compared with all the others of the same variety, ‘any other’ is used to exclude the former.

E.g.: Gold is more precious than any other metal. (☓)

Gold is more precious than any other metal.(✓)

Look at the following sentences :

Diamond is more precious than any metal.

The above sentence is correct because diamond is not a metal.

Adjectives that end in ‘ior’ are followed by ‘to’ and not ‘than’.

Some adjectives are used in only positive and superlative degree and not in comparative degree.

Adjective ‘preferable‘ is used in only comparative degree.

This is preferable to that. (✓)

E.g.: Gandhiji was noblest and wiser of all the leaders. (☓)

Gandhiji was the noblest and wisest of all the leaders.(✓)

If ‘the’ is used before an adjective, the adjective becomes a plural common noun. It will hence take a plural verb.

Verbs are modified by adverbs.

Here, works is a verb and honestly is an adverb. ‘ly’ is added to an adjective to convert it into an adverb (except in some cases)

But verbs of sensation (seem, look, appear, feel, taste, sound and smell) is followed by an adjective and not an adverb.

E.g.: When he heard the news, he became sad.

Many nouns are a part of hyphenated or compound adjectives. They never come in plural form.

I delivered a two-hour lecture. (✓)

He gave me two hundred-rupee notes. (✓)

If a noun works as an adjective, it cannot be in plural form.

Some adjectives are confusing in their meaning. Hence they should be used carefully.

(1) Farther and Further – Farther means ‘at a greater distance’.

E.g.: She lives at the farther end of the lane.

E.g.: I did not receive any further order.

Last means ‘after all others’.

E.g.: What is the latest score?

Nearest means ‘within a short distance‘.

E.g.: Which is the nearest hospital?

The bank is in the next building.

Later means ‘at some time subsequent to a given time’.

Latter means ‘second of the two’.

E.g.: The latter part of the movie was boring.

Note – Former is the opposite of latter.

Possessive case comes after ‘All’ and ‘Both’ and not before them.

All my friends have got selected. (✓)

If both positive and comparative degree of an adjective are used in a single sentence, both ‘as…..as’ & ‘than‘ will be used.

E.g.: He is as intelligent as if not more than his brother.

Comparative degree does not come with the word ‘times‘.

E.g.: My house is four times bigger than yours. (☓)

If adjective of size, colour, age etc. come together in a sentence, they should be used in the following order.

Here, beautiful  is opinion, tiny is size, heart-shaped is shape, purple is colour, American is origin, diamond, is material wedding is purpose.

The thief flashed a big sharp knife and asked the cashier to fill the black leather bag with money.

Here, big is size, sharp is shape, black is colour, leather is material.

We can remember the order as OSASCOMP.

Note : ‘Tall, dark and handsome’ or ‘fair and beautiful’ are such common examples that have opinion after colour.

E.g.: He is the most cleverest of all the officers. (☓)

He is the cleverest of all the officers, (✓)

This is more better than that. (☓)

E.g.: He is senior and more experienced than you. (☓)

He is senior to and more experienced than you. (✓)

Correct Uses of Some Adjectives PDF

Candidates can download the pdf of correct uses of Adjectives by clicking on below link.