Hacker : Hacker is a term used by some to mean “a clever programmer” and by others, especially those in popular media, to mean “someone who tries to break into computer systems”. A Hacker can be a expert programmer.

Cracker : Malicious Hacker known as cracker, refer to those who break into computers without authorization.

Hacking : Hacking is unauthorized use of computer and network resources.(The term “hacker” originally meant a very gifted programmer. In recent years though, with easier access to multiple systems, it now has negative implication). 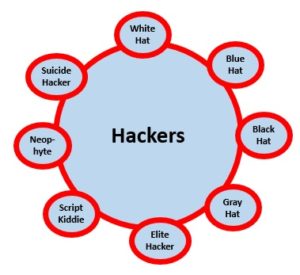 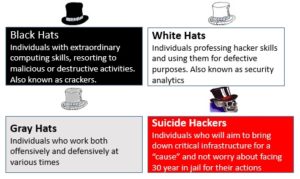 Difference between Hackers and Crackers :

Hackers : A Hacker is a person who is extremely interested in exploring the the things and recondite working of any computer system or networking system. Most often, hackers are expert programmers. These are also called Ethical Hackers or white hat hackers. The technique they use is called ethical hacking.

Ethical Hacking means you think like Hackers. First you hack systems and find the loop holes and then you try to correct those loop holes.These type of hackers protect the cyber world from every possible threat and fix potential future security loop holes. These people are also called the “GURU’s” of Computer Security.

Crackers : Crackers or Black Hat hackers are also called cheaters or simply criminals. They are called criminals because they intend to cause harm to security, stealing very useful data and using it in wrong ways. Phishers, who steal account information and credit card numbers, also fall into this category.