Hydro-electric power is the second most important source of power in India. Static GK is also an important part of any government exam, we are providing you the list of Important Hydroelectric Power Plants in India that might appear in any of the upcoming examinations.

Static is a section which you have to study in bits and parts. So do read it on a light note and revise it after two or three days and we can assure that you will retain the names and their states till the exam. 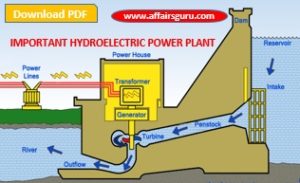 What is a Hydroelectric Power Plant?

Hydro power is considered as one of the most economic and non polluting sources of energy. Power generated from water is termed as Hydroelectricity. Hydro electricity means electricity generated by hydropower or from the use of the gravitational force of falling or flowing water. One of the most common forms of power generation since this form of energy neither produces any direct waste matter nor is subjected to exhaustion.

Tehri Dam Hydro-electric power plant project is the highest hydro power generated project, commissioned in India, 2006. With the help of USSR, its technical construction was started in 1978.

Srisailam is the second largest working hydro-electric power project in India. This dam is constructed on Krishna river at the border of (Andhra Pradesh and Telangana districts) and (Kurnool and Mahabubnagar districts) respectively.

Nagarjunasagar dam was commissioned in 1967. It is created by NJ Sagar dam built across Krishna River – spread in the Nalgonda district of Telangana and Guntur district of Andhra Pradesh states.

Sardar Sarovar Dam is a concrete gravity dam on the Narmada river near Navagam in Gujarat. It is the largest dam of Narmada Valley Project.

Power generated by Bhakra Dam is shared between Himachal Pradesh and Punjab and most of the outflow water is used by Punjab and Haryana for irrigation. It is a concrete gravity dam built across Sutlej River at Bhakra villege in Bilaspur District of Himachal Pradesh.

Pandoh dam was commissioned in 1977 for the primary purpose of hydroelectric power generation. It is built across Beas river in Mandi district of Himachal Pradesh.

Baira Siul Power Station is a major step towards harnessing hydroelectric potential in Himachal Pradesh. It envisages utilization of the combined inflow of three tributaries of the Ravi river, namely Baira, Siul and Bhaledh for generation of power on run-of-the-river basis.

Chemera Dam is built on river Ravi, which is located near Dalhousie town in Chamba district of Himachal Pradesh.

Chamera II is a run of the river hydroelectric dam built by NHPC India. It was commissioned in March, 2004.

The Pong Dam, also known as the Beas Dam, is an earth-fill embankment dam on the Beas River in the state of Himachal Pradesh, India, just upstream of Talwara. As the second phase of the Beas Project, construction on the dam began in 1961 and was completed in 1974.

Dul Hasti is a 390 MW hydroelectric power plant in Kishtwar district of Jammu and Kashmir, India. It is gravity type of dam.

Salal Hydroelectric Power Station Stage-I and Stage-II is constructed on Chenab river in Jammu and Kashmir.

Sharavathi Dam, officially known as the Linganamakki Reservoir, is built across Sharavathi river, about 6 kilometers away from Jog Falls.

The dam is constructed across river Kalinadi. The dam was primarily built as hydroelectric project for supply of water to turbines of electric power generating station. The project started generating power since 1997. Teh Dam was built and is operated by KPCL since the year 1997.

Idukki is the largest source of electricity in the state. It is built across Periyar River in Idukki district of Kerala. Commissioned in 1976 and dedicated to nation by then Prime Minister Smt.Indira Gandi.

Bansagar or Ban Sagar Dam is a multipurpose river Valley Project on Sone River situated in the Ganges Basin in Madhya Pradesh,

Bargi Dam is one of the first completed dams out of the chain of 30 major dams to be constructed on Narmada River in Madhya Pradesh, India.

Omkareshwar Dam Power Station has an installed capacity of 520 MW. It is a gravity dam on Narmada river in Khandwa district of Madhya Pradesh.

The project, which will supply electricity and water, was started in 1983 and resumed in 2002 after being at a standstill for a period of time.

This project is constructed across Koyna river in Maharashtra. The Koyna Hydro electric project is the largest completed Hydal power project in India.

Water from the dam is used for irrigation as well as for producing electricity at the Bhira hydroelectric power plant, operated by Tata Power. The station operates six 25MW Pelton turbines established in 1927 and one 150MW Pumped Storage Unit. Water from this reservoir located in Krishna river basin is diverted to the Bhira power house for generating Hydro electricity.

It is located on Godavari river at the site of Jayakwadi village in Paithan taluka of Aurangabad district in Maharashtra State state of India. It is of Earthen da – type of dam and construction was began in 1965 and commissioned in November, 1984.

Kolkewadi Dam contributes in the 3rd stage of power generation of the Koyna Hydroelectric Project. The electricity is generated in the underground power station located at the base of the dam.

Rangit uses water of river Rangit for generation of Power. It is a ROR (run-of-the-river) with Pondage Scheme and commissioned in January, 2000.

Teesta-V is one of six hydropower projects in river Teesta in East Sikkim district with three turbines with a total installed capacity of 510 MW.

Tanakpur Power Station (3×31.4 MW) is a run of the river scheme to harness the hydro power potential of Sharda River (Mahakali River in Nepal). It is located near the town of Tanakpur in the district of Champawat.

Dhauliganga Dam is a concrete face rock and earth-fill embankment dam on the Dhauliganga River near Dharchula in Uttarakhand, India close to the borders with Nepal and Tibet. It was commissioned in 2005.

Loharinag Project is located at Bhagirathi river. Loharinag Pala Hydro Power Project is a run-of-the-river hydroelectricity project. Its construction was started in 2006 and commissioned in October 2011.

The Luhri hydroelectric project is planned to come up between the villages of Nathan and Chaba (about 80 km from Shimla (HP). Himachal Pradesh.

Vishnugad Pipalkoti Hydro Electric Project (4 x 111 MW) is located on Alaknanda River, a major tributary of river Ganga, in district Chamoli in the state of Uttarakhand. The nearest railhead is Rishikesh (225 Km) and the nearest Airport is Jolly Grant,  Dehradun (240 Km). The project is approachable by an all weather road (National Highway No. 58).

Karcham Wangtoo Hydroelectric Plant is a 1200 MW run of the river power station on the Sutlej river in Kinnaur district of Himachal Pradesh.

Upper Indravati Dam is is a gravity dam on Indravati river with installed capacity of 600 MW.

Belimela is a joint project of Andhra Pradesh and Orisha governments. The Belimela Reservoir is constructed in Malkangiri district of Odisha on the river Sileru, a tributary of Godavari river.