Government has changed the existing name of places, airports, railway stations, and govt schemes on the name of some big and inspired leaders or any others. 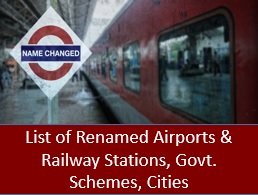 Some of the approved name changes proposals are given below.

Other renaming proposals approved by the ministry include