Dear Aspirants, we are providing here you the each terms that have been used into this number system. All the aspirants should have knowledge about this. It is also come under each competitive exam.

Importance : Being a basic concept of mathematics: 1 and 2 questions on number system are regularly asked in different competitive exams. Its knowledge is also essential to solve other questions. 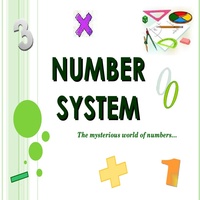 Scope of questions : Different type of questions like based on fractions, even or odd or whole or divisible or prime or coprime or rational or irrational numbers and related to divisibility, order, ascending, descending, addition, multiplication, inverse numbers may be asked.

Way to success : These questions are solved by different methods. Maximum practice and rechecking is the way to success for this chapter.

Number System : A number system is a system of writing for expressing numbers. It is the mathematical notation for representing numbers of a given set by using digits or other symbols in a consistent manner. It provides a unique representation to every number and represents the arithmetic and algebraic structure of the figures. It also allows us to operate arithmetic operations like addition, subtraction, and division 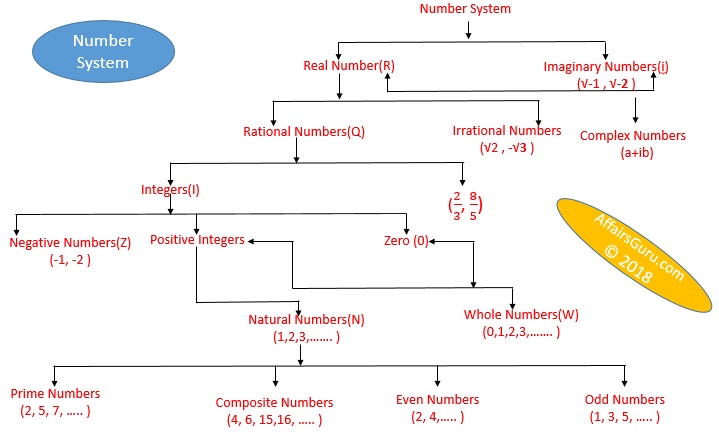 Types of Number System in Maths

Natural Numbers : Set of counting numbers is called natural numbers. It is denoted by N. Where,

Whole Numbers :When zero is included in the set of natural numbers, then it forms set of whole numbers. It is denoted by W. Where,

Integers : When in the set of whole numbers, natural numbers with negative sign are included, then it becomes set of integer. It is denoted by I or Z.

Further 0 is neither negative nor positive integer.

Prime Numbers : The natural numbers which have no factors other than 1 and itself are called prime numbers.

It is not necessary that two co-prime numbers are prime always. They may or may not be prime numbers.

Rational Numbers : The number which can be expressed in the form of $$\frac { p }{ q } $$ Where p and q are integers and coprime and $$q\neq 0$$ are called rational numbers. It is denoted by Q. These may be positive or negative.

Cyclic Numbers : Cyclic numbers are those numbers of n digits which when multiplied by any other number upto n gives same digits in a different order. They are in the same line. As 142857

Note : In a perfect number, the sum of inverse of all of its factors including itself is 2 always.

Multiplicative Inverse : If a X b = 1. then we can say that a and b are multiplicative inverse of each other. As