Noun form a large proportion of English vocabulary and they come in a wide variety of types. 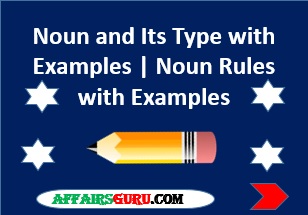 Noun can name a person:

Noun can also name a place:

Noun can also name things, although sometimes they might be intangible things, such as concepts, activities, or processes. Some might even be hypothetical or imaginary things.

There are several different types of noun, as follows :

Number of a Noun

Gender of a Noun

Case of a Noun

For example
(i) Raman is my friend.

(ii) Who bought this book?

Raman, the Captain pf our team, has been rewarded.

Apposition means a placing near just ‘as captain’ is placed after ‘Raman’. It is a kind of descriptive expression not joined by any conjunction.

(A) (a). Uncountable Nouns are used in the singular forms only.

(b). Indefinite article is not used before them.

(c). They are not used with plural verbs.

Some of the important Nouns of this kind are

(iv). Young persons dislike the advices of the elderly people. (Use ‘advice’ in place of ‘advices’)

(B) These nouns may be used to denote singularity as follows

(iii). an act of mischief

(vi). an article of luggage

(C) These nouns may be used to denote plurality as follows

There are some of the collective nouns which are used with plural verbs. For example

(b) The nouns ‘committee, jury, house, ministry, family, mob, crowd, audience, police, team, number, board, staff, public’ are used with singular verbs when they are used as a body or group and not as members.

(c) when these nouns denote members or individuals, the verb is used in plural form.

(i). Cattles are grazing in the field. (Use ‘Cattle’ in place of ‘Cattles’)

(iii). The committee is unanimous on this issue. (Correct)

(iv). The committee are divided and there is bitterness among the members. (Correct)

(v). The peoples of all the countries should work for peace. (Correct)
(vi). The average Hindu family in India consists of four members. (Correct)

(vii). His family are not agreed on this point. (Correct)

(ix). The audience were forbidden to occupy chairs. (Correct)

(xi). The Police were posted all over the route. (Correct)

(xii). The team are full of high spirits. (Correct)

(xiii). The team is at the top in this competition. (Correct)

Note : ‘Peoples’ is used when we talk of the people of different countries.

‘Offspring, deer, fish, sheep‘ are expressed as singular or plural only by the use of verb. Both in singular and the plural they have the same form.

(i). Sheeps are economically useful. (Use ‘Sheep’ in place of ‘Sheep’)

(ii). A sheep is grazing in the field. (Correct)

Note : ‘Fishes’ may be used in the sense of different number and kind.

Some of the nouns (ending in ‘s’ or ‘es’) are used with singular verb.

(A) Branches of learning. For example

(B) Diseases. For example

(C) Games and sports. For example

(D) Titles of books. For example

(E) Descriptive names of the countries. For example

(F) Some other nouns are

(iv). A/ The summons has been served on him. (Correct)

(vi). Two series of matches was played last year. (Use ‘were’ in place of ‘was’)

Study the uses of Nouns as singular and plural in forms.

Some of the nouns are generally used in the plural form with plural verb.

(a) Articles of dress

(b) Name of the instruments
‘Scissors, spectacles, shears, scales’

(c) Other nouns such as

(iii). A pair of spectacles has been brought by me. (Correct)

A compound noun (numerical + noun) is not used in plural if a noun does the work of an adjective. For example.

(iii). There are hundreds of partially built houses. (Correct)

Use of apostrophe with ‘s’

(A) The use of apostrophe with ‘s’ is not correct in the case of non-living things. It is restricted only to living things, time, weight, distance, amount or personified nouns.

(B) Two nouns in the possessive case denote plural form. When apostrophe with ‘s’ is used with one noun. It expresses singular form. For example

(C) With compound nouns apostrophe with ‘s’ should be added only with the last word.

(D). Pronouns are written by omitting apostrophe but ‘s’ is added. For example.

(E). Possessive case is indicated by apostrophe without ‘s’ after plural nouns or words ending with ‘s’.

(F). (a). ‘Else’ combined with indefinite pronouns (somebody, any body, nobody etc) is expressed in possessive case as somebody else’s in place of somebody’s else.

(i). This is not my book. This is somebody’s else.(say somebody else’s)

Note : ‘Who’ should be converted into possessive ‘whose’. So ‘whose else’ is correct.

Tow adjectives denoting different meanings and qualifying the same noun are considered plural and are used with plural verbs. For example

(i). Cultural and social life in India are changing.
(ii). Summer and Winter vacation are compulsory in our schools.

Noun after preposition is repeated in singular form. For example

The use of fractions.

(i). One and a half years are wasted.

(ii). One and a half hours are wasted.

A student is required to study the plural forms of certain nouns carefully. Such nouns along with their plural forms are given below.