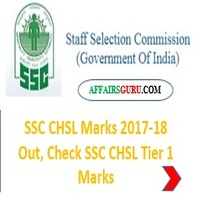 You don’t have to calculate your marks from response sheet this time due to SSC released marks in a new format where the commission has provided the calculation itself section wise. Candidates can also check through below image.

Candidates can check official notification for SSC CHSL Tier-1 Marks by clicking on below link.

Candidates can alse go through the syllabus for SSC CHSL Descriptive exams by clicking on below link.