The Rise and Fall of Mughal Empire

The Mughal ruled Northern India from 1526 – 1857 AD. The Lodis were the last dynasty in Delhi before the Mughals established their presence. In 1529, at Panipat, a battle was fought between Babur and Lodhi army. Lodhi Army was defeated.

What factors contributed to the rise and fall of the mughal empire?

Babur was a king of Kabul. Like his ancestor Timur, he also wanted to loot India. Being an able general, Babur could easily defeat the Lodhi soldiers. In the battle of Panipat, Babur was helped by the Rajput prince, Rana Sanga of Mewar. After winning the battle, Babur not only took his share of the loot, but also established himself as the ruler. He defeated Rana Sanga and the Afghan generals who helped in his battle against the Lodhis. Babur was a great scholar. He wrote down whatever he saw. These writing were called Babur Nama. He was an admirer of Nature’ bounty.

He build many parks inside and outside the palaces. Though he laid the foundations of Mughals rule in India, he did not live long to see it growing. 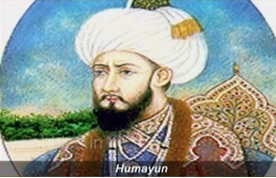 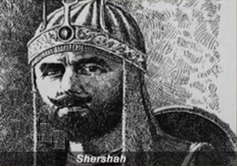 After defeating Humayun, Shershah became the ruler of India. He was an able administor. He introduced a rational system of Taxation. He introduced many reforms. He constructed the Grans Trunk Road; he planted trees, built rest houses. He issued the coin known as Rupia, which we call today as Rupee. He also introduced Postal system. He died in an accident in 1545.

In 1555, Humayun regained the throne. 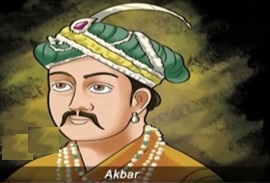 Akbar was thirteen when he became the ruler. His guardian Bairam Khan, a distinguished general, became the Regen. When Akbar attained the age, he took over the government. Gwalior, Ajmer, Malwa and Jaunpur were won over by Akbar. He was very friendly with the Hindus. Through matrimonial alliances and through appointment of Hindus in high positions, Akbar was able to command over a large empire.

Akbar divided his empire into fifteen provinces or sabas. Each Saba was sub-divided into a number of Sarkars and each Sarkar into Parganas. The governors or subadar was for the law and order of his Saba.

Akbar introduced Mansabdari system by which every officer was given a rank or mansab. The officers and nobles were paid grants of land revenue known as Jagirs. The state enjoyed income from two sources land revenue and trade. Sea trade brought the Europeans to India. Though himself illiterate, Akbar encouraged scholars. Great scholars like Abul Fazi, Faizi, Birbal and Todar Mal enjoyed Akbar’s love and respect. Persian was the official language that time. Writing in Hindi made its beginning during Akbar’s time. 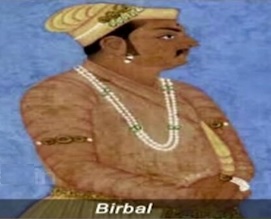 Akbar was a great patron of music and art. Tansen, the famous musicain used to entertain the king. New Indo-Persian style of art and architecture developed. Akbar built magnificent palaces, gardens, learning centres etc. Fatehpur Sikri is an example of the excellent style of architecture that was famous at that time. 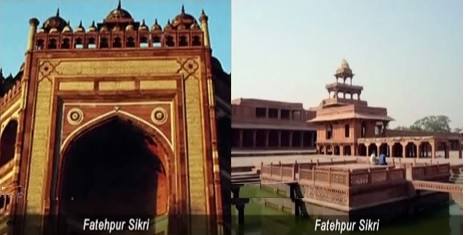 Akbar was liberal in his policy towards non-muslims. In fact he established a religion which was common to all, contained the common teachings of all religions. Akbar called it Din-i-illahi or divine monotheism. It was worth mentioning here that the idea of sulh-i-kul or universal peace and harmony was the message of Din-i-ilahi. His court had the ‘Nine Gems’. One of the ‘Gems’ Abdul Faizi wrote ‘Akbar Nama’. Faizi translated Bhagavad Gita into Persian. Birbal’s wit and intelligence was well-known.

Akbar’s sincere efforts to bring the Indians together were a landmark in the social life of the people. 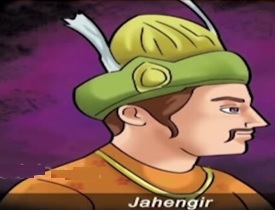 Jahangir succeeded Akbar. He was admirer and followers of many of his father’s qualities. Because of Akbar’s efforts and far-sightedness, Jehangir could enjoy a peaceful reign. Rulers of Mewar and Ahmednagar became his allies. It is during this time that Sir Thomas Roe and Captain Hawkins visited India as an ambassador of the king of England. 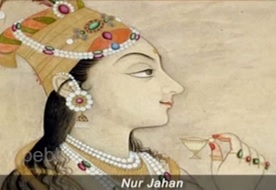 Jehangir’s queen Mehrunisa whom he called Nur Jahan was very beautiful, intelligent and educated. She literally ruled over the kingdom.

When Jehangir gave permission to the Britishers to set up factories in India, he had no idea that the Britishers would became the rulers. The memoirs of Jehangir is called Tuzuki-i-Jehangir. Ustad Mansur, a famous painter of animals and birds, found a good portion in Jehangir. He was a lover of nature. He died in 1627. 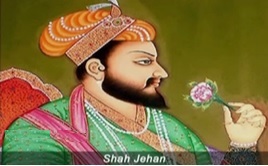 Shah Jehan became a ruler after the death of Jehangir. Shah Jehan had to deal with many revolts. Tajmahal, the world famous tomb of his queen Mumtaj mahal and the peacock throne belong to his reign. Diwan-i-Am, Diwan-i-Khas, the Jama Masjid, the Moti Masjid, the Red Fort etc. are the monuments Shah Jehan built.

The Taj mahal on the banks of the river, Yamuna, a marvel of marbles, precious & semi-precious stones, gold and silver is one of the seven wonders of the world. It took 20 years to build the marble marvel.

Shah Jehan in his old age, had to witness the fight for the throne among his four sons. One of the sons, Aurangazeb defeated his brothers. Imprisoned his father and crowned himself as the king. In 1666 Shah Jehan died at the age of 74.

Aurangazeb’s reign of nearly fifty years was full of conflicts. He raised the taxes to sustain the campaigns. By himself an honest man with a simple life style, he was a musalman to the core. So his rule with the help of the laws of Islam made him very unpopular. The Rajputs, the Sikhs, the Jats, the Marathas resisted him. As if this is not enough, he had to face trouble with the Portugese and the English. He destroyed many Hindu temples. He banished all scholars, artists and poets from his court. Sowhen he died, in March 1707, the empire was collapsing.

Shivaji and the Marathas

The death of Aurangazeb led to chaos and confusion about the succession to thrones. Bahadur shah became the king but had to face the defiance of the Rajputs, the Sikhs, the Marathas and the Afgans. He died in 1712.

The Marathas came to power. Foreign invasions of Nadir Shah and Ahamed Shah Abdali weakened the mughal empire. Though the Marathas were defeated by the Afghans at the battle of Panipat in 1761, they regained power.

And the powerful Marathas leader was Shivaji. Shivaji was ambitious and decided to head an independent kingdom. With a small army of brave soldiers, with intelligent planning and execution of strategies, Shivaji succeeded in overcoming enemies. He was an epitome of patriotism.

History tells us that Shivaji was a real pain in the neck for Aurangazeb. A brave, fearless warrior, Shivaji is even now remembered as the most popular hero who dared against Mughals.

After Aurangazeb’s death, the Mughal empire broke down due to the quarrels among the nobles in the court, among the sons of Aurangazeb, the attack from outside and the inefficiency of the rulers. The Persian rulers Nadirshah attacked India and carried away huge quantities of gold, jewels and other treasures from India. He killed many and destroyed beautiful buildings in Delhi. He left India with Koh-i-noor diamond, the Takht-i-Taoos, elephants and horses.

During the time of last Bahadur Shah Zafar, the revolt of 1857 broke out. The British suppressed the revolt, exiled the Emperor to Rangoon where he died in 1862. The Mughal empire lasted for nearly three hundred and fifty years. One of the reasons for its fall was that, down the line of success, it is met with financial troubles. The Zamindars, with the support of the peasants defied the Emperors. The aristocracy, steeped in luxury and enjoyment was completely unaware of the advent of the Europeans who were eagerly and cleverly looking for weak spots to expand their empire and treasury. 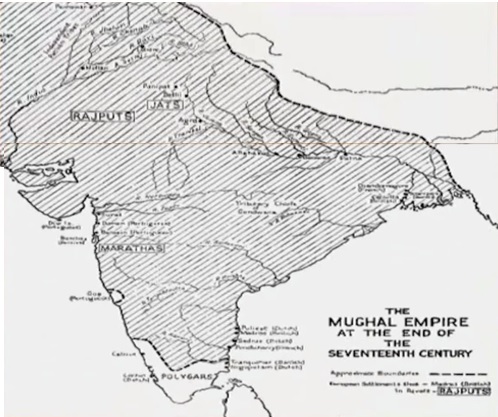