Types of Conjunction In English Grammar With Examples PDF 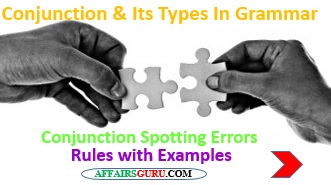 What are Conjunction in English Grammar?

Conjunctions are words that link other words, phrases, sentences or clauses. For example, and, or, but, nor, for, yet, so, although, because, since, unless, when, while, where are some conjunctions. We can also simply call them as ‘joiner’.

How many types of conjunction are there in English Grammar? 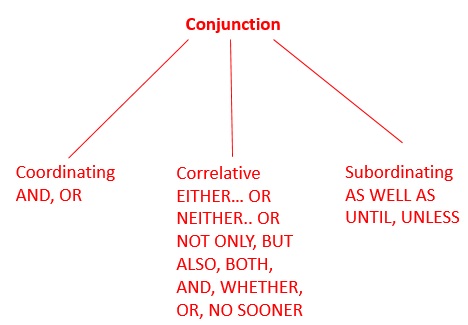 and, or, but, so, nor, for, yet, also, either….or, neither…nor, etc are some of the Coordinating Conjunctions.

It is used to indicate opposition or contrast between two statements. Here- still, but, only, yet, whereas, while, nevertheless, etc are some of the adversative coordinating conjunctions.

(b) Cumulative or Copulative

It is used when we need to only add one statement to another. Here – and, both….and, not only….but also, as well as etc are some of the cumulative coordinating conjunctions.

It is used to indicate choice between two statements. Here – or, neither…nor, either….or, else, neither, nor, otherwise, etc are some of the Disjunctive or Alternative coordinating conjunctions.

It is used to express an inference in the sentence. Here – for, so, yet etc are some of the illative coordinating conjunctions.

Both Ram as well as Mohan are going for playing.(Incorrect)

Both Ram along with Mohan are going for bowling. (Correct)

Both Ram and Mohan are going for playing. (Correct)

Neither the teacher or the student is keen on joining the dance. (Incorrect)

Neither the teacher nor the student is keen on joining the dance. (Correct)

Not only he goes to market but also stays there. (Incorrect)

He not only goes to market but also stays there. (Correct)

He is going not only to open a school but also a hospital. (Incorrect)

He is going to open not only a school but also a hospital. (Correct)

No sooner had he arrived then he was asked to leave again. (Incorrect)

No sooner had he arrived than he was asked to leave again.(Correct)

Hardly had I reached the station than the train left.(Incorrect)

Hardly had I reached the station when the train left.(Correct)

He asked me that which was your favourite pen. (Incorrect)

Above In red are subordinate sentence.

Simple Subordinating Conjunction (Unless, Until, till, lest)

Compound Subordinating Conjunction (as soon as, as far as, )

Difference between till and Until and Unless

Until – used in sentences where time clause exists.

Unless – used in sentences where condition exists.

You will fail in exam unless you study hard.

I want to stay here until she goes back.

Please wait in the lobby until they call your name.

Unless/ Until/ lest + not (Incorrect, not should not come after Unless/Until/lest)

should come after lest only.

would, may, should not are all wrong if coming after lest.

You cannot demand all your articles unless you do not give advance notice.

Walk carefully, lest you would slip. (Incorrect)

Walk carefully, lest you should slip. (correct)

than/then never come after As soon as/ As long as but can come comma (,)

As soon as we got out the car then it started raining.(Incorrect)

As soon as we got out the car, it started raining.(correct)

As soon as he wakes up then he checks his phone for messages.(Incorrect)

As soon as he wakes up, he checks his phone for messages.(Correct)

Then(show continuity) / Than (compare two thing with each other)

You wake up in the morning and then have breakfast.

I am older than you.

Such – As [General Sense]

For Example. Such was her behaviour that everyone disliked her.

The reason/ The reason why – that

Use ‘that’ with adjectives

Example. He works as his father does.

We can use ‘But that’ in place of ‘except that’ because they both give the same sense.

Conjunction & Its Types With Examples PDF

You can download the Conjunction & Its Types PDF by clicking on below link.

Conjunction & Its Types With Example PDF

You can also download the Conjunction Spotting Error PDF by clicking on below link.

If you have any questions or doubts, please drop your comment below in box.